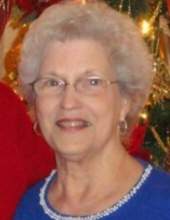 She was retired from her 53 year career as the Front End Manager for Kroger and was a member of Lone Oak First Baptist Church.

She was preceded in death by her first husband, Hollie W. Russell; her parents, James T. Bowland and Gladys Mae McWaters Bowland; and stepson, Hollie B. Russell.

Funeral services for Mrs. Parker will be held at 1:00 pm on Tuesday, January, 30, 2018 at Milner & Orr Funeral Home of Paducah with Rev. Mike Williams officiating. Burial will follow at Woodlawn Memorial Gardens.

Contributions can be made in the form of donations to: First Baptist Church Lone Oak, 3601 Lone Oak Rd, Paducah, KY, 42003.