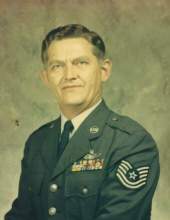 Eddie was born in McCracken County on September 21, 1931 to the late Thurman and Ola Balkey Gray. He lived and grew up in Paducah and attended McKinley Elementary School, Franklin Junior High School, Augusta Tilghman High School, and Paducah Community College, where he obtained his associates degree.

He joined the U.S. Air Force in 1952 as a volunteer during the Korean War. He attended basic training at Lackland Air Force Base in San Antonio, Texas. He was assigned to Kelly Air Force Base at 1734th Air Transport Squadron as an on the job training for medical technicians moving sick and wounded by air craft, called Air Evac! He attended Air Evac school in 1952 in Montgomery, Alabama. In 1954, he was assigned and attached to special missions in the movement of Polio patients. Eddie attended Biological and Chemical Warfare School in 1953. He was assigned to the Air Evac Control Center as ground duties, when not flying.

In 1964, Eddie was off to school again in the Medical Services Corp. Technician School. By 1965, he had received orders to Clark Air Force Base Philippine Islands. In 1966, he was assigned to the 57th Air Evac Squadron. As part of his P.I. mission, he flew every day to Vietnam for sick and wounded aboard a C-141 Aircraft to other hospitals or to home (USA). ABC News produced a documentary about these missions named "To Save A Soldier." In this documentary, Eddie was highlighted as he supervised the transformation of a C-141 aircraft into a flying hospital. The documentary goes on to depict the rescue of wounded American soldiers in the field in Vietnam, his helicopter transport to a combat medical center, then on to a support hospital in the Philippines and from there to a hospital in the United States.

During this time, he went to escape and evasion school in Okinawa, Japan and sea survival school in Hawaii. Eddie went on to become an adviser to the Tenn Air National Guard. He retired from the USAF in 1973, having earned 15 medals, plus the Air Medal.

Eddie was a member of the VFW, DAV, Riviera Owners Association, and AeroMedEvac Association.

Eddie was preceded in death by his parents; two sisters, Joyce Gray and Margaret Johnston; and two brothers, Eli Gray and Wilford Gray. His grandparents were Bedford and Mary Ellen Gray and Frank and Susie Balkey.

Funeral Services will be held at 1:30 pm on Sunday, February 3, 2019 at Milner & Orr Funeral Home of Paducah with Rev. Paul Hatcher and Rev. Eddie Smith officiating. Burial will follow at Woodlawn Memorial Gardens.