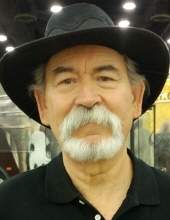 Gary Cope, 67, of Paducah, went to be with his Lord and Savior on July 23, 2017 with his wife, Rubena, sister, Sandy and longtime friend and pastor, Larry Starnes, by his side.

Gary was born on November 8, 1949 in Paducah, KY. His career as a welder began in 1972 with Marine Ways and the last twenty-nine years were spent as a welder and fitter at James Marine. He was a member of Oasis Christian Center. Gary was a collector of many things.

Surviving are his wife of forty-four years, Rubena Kay Marks Cope; two sisters, Sandy (Stan) Henize of Frankfort, KY and Penny (Dan) Dutton of Simpsonville, KY; an aunt, Imogene Stanley of Mayfield; one niece, Alisha Henize and her son, Drew of Frankfort; two sons by a previous marriage; many loving cousins; two godchildren; his stepmother, Rita Cope Shelton of Paducah; and two step-brothers, Jay Orazine and Wes Orazine both of Paducah. Gary was beloved by Rubena's family and will be dearly missed.

He was preceded in death by his parents, Lester B. Cope and Louise Cooper Cope.

Private graveside services were held on Monday, July 24, 2017 at Woodlawn Memorial Gardens conducted by Pastor Larry Starnes. His beloved Great Danes, Brutus and Honey, were buried by his side as he requested.

Thank you to the James Marine family and Gary's co-workers who tried resuscitation efforts at work. We will forever be grateful. And to Baptist Health - Paducah ICU for all that you did for us.