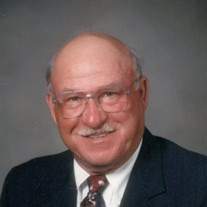 James Kendrick Wallace, Jr., 89, of Lone Oak, Kentucky, passed away at 8:15 AM on Wednesday, June 13, 2018 at Parkview Nursing & Rehabilitation Center in Paducah.

Mr. Wallace was a Self-employed home builder in the area for over 40 years. He was a member of Highland Cumberland Presbyterian Church, Woodmen Life and the Cumberland Pioneers. He was a Veteran of the U.S. Army (Corps of Eng) serving in Germany and Australia during the Korean conflict. James enjoyed fishing and woodworking.

Funeral services will be held at 1:00 PM on Saturday, June 16, 2018 at Highland Cumberland Presbyterian Church in Paducah with Rev. Bud Russell and Rev. Doug Hughes officiating. Burial with Military Honors will follow in the chapel at Woodlawn Memorial Gardens in Paducah.

Visitation will be held from 10:00 AM to service time on Saturday at Highland Cumberland Presbyterian Church.