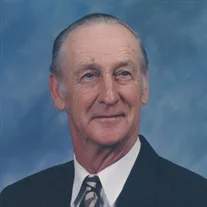 Mr. James R. “Jack” Brooks, age 88 of the Hickory Community passed away at 9:44 AM on Sunday, December 8, 2019 at the Jackson Purchase Medical Center in Mayfield, Ky.

He was a member of the Pottsville Church of Christ, and he was formerly an Elder at Melber Church of Christ, he was a U.S. Army Veteran of the Korean War; he was retired from Modine Manufacturing and The Kentucky State Highway Department, he also had worked for Graves County Auto Salvage. After retirement, Jack spent countless hours volunteering for the Bread of Life Humanitarian Disaster Relief Effort where he served as Co-Director, and helping at The Pumpkin Barn.

Expressions of sympathy may take the form of contributions to: Bread of Life Humanitarian Effort, P.O. Box 162, Melber, Ky 42069