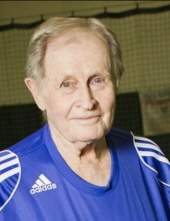 Paul was born March 28, 1929 in Paducah to Ralph Glenn Rowton Sr. and Katherine Annette (Browder) Rowton. Paul was a 1947 graduate of Augusta Tilghman High School. Paul's early working career began with Rowton TV and Sound Corporation in Paducah, where he worked alongside his family in sales and repair in the early days of television and eventually traveled throughout the United States, installing audio sound systems at major venues. He and Shirley Jean Triplett Rowton were married May 31, 1958. As Paul's career took various paths through sales, it was in the 1970's, that he was able to spend his working hours with the second love of his life, the game of tennis. Introduced to the game in the late 40's, Paul studied and played the game as often as possible, won countless amateur tournaments throughout Kentucky, the South and nation before becoming a USTA teaching professional. In 1972, he was hired as the first tennis pro at Paducah Country Club, where he gave lessons and ran a tennis pro shop. In 1985, he installed a court in his backyard, where he gave lessons. He continued at a new location in 2003 when he and his son Nathan opened the Paul Rowton Indoor Tennis Center.
On the court, he was known as "Coach Paul", although to his family, he was "Grandad Tennis". He taught the game he loved to thousands of children and adults over a nearly half century career. Several of his students not only won at regional and state levels, but went to college on scholarships earned for tennis excellence. It was much of his influence that has helped tennis grow in popularity in this region and become what it is today.

Funeral services will be held at 11:00 a.m. on Saturday, June 30, 2018 at Milner & Orr Funeral Home of Paducah with Andy Clausen officiating. Entombment will follow at Woodlawn Memorial Gardens.