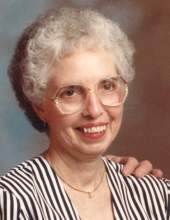 Peggy Lowery, 83, of Paducah, passed away on January 3, 2019 at Parkview Nursing and Rehab.

She was born on February 12, 1935 in Brookport, Illinois to Alonzo Calvin Snelling and Cordia Lorine Allen Snelling.

She was a member of Sunny Slope Church of Christ. She worked 23 years as an inspector at Florsheim Shoe Factory prior to becoming a cook at the McCracken County Jail. She enjoyed being a volunteer at Western Baptist Hospital.

She was preceded in death by her husband, Jack Lowery; her daughter, Jacqueline Brooks; two brothers, Alonzo Samuel Snelling, Allen Ray Snelling and her parents.

Funeral services will be held on Sunday, January 6, 2019 at 2:00 p.m. at Milner & Orr Funeral Home of Paducah with Bro. Glen Head officiating. Burial will follow the service at Woodlawn Memorial Garden.