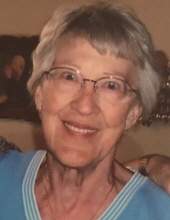 Phyllis Marie Brown 82, died peacefully at home on Saturday, August 25, 2018 following a lengthy illness. She was lovingly taken care of at home for two and a half years by her family and friend Haley Pina (caregiver). We will always remember her beautiful smile as she was our "sunshine"!

Phyllis was born November 25, 1935 in Morristown, MN. She lived on the family farm until after graduating high school, moved to Rochester, MN, attended the St. Mary's School of Nursing and became a Licensed Practical Nurse. She Married Vernon Edward Gatz on October 4, 1958 and together they had six daughters (two sets of twins)! She worked at Olmstead Community Hospital for many years, and was an honorary member of the Minnesota Mothers of Twins Club. Vernon died in 1967 and she bravely raised her daughters alone. She later met and married Roy Eugene (Gene) Brown, moved to Paducah, KY in 1980, and worked as Staff Development Coordinator at Oakview Nursing and Rehabilitation Center in Possum Trot before retiring. Gene had two children and together they had one son.

Our mother had a very strong faith in God, and always said she felt him by her side. She was a hard worker and there was never a project she was afraid to tackle. She was an amazing cook, talented knitter, seamstress, loved to read and most of all loved being a nurse by taking care of people. No matter what life threw her way, she dug in and did what needed to be done.

Phyllis was preceded in death by husband Vernon Gatz ( 51 years to the day), husband Gene Brown in 2007, her parents Alfred and Selma Melchert, and brother's Milton and Reinhardt Melchert.