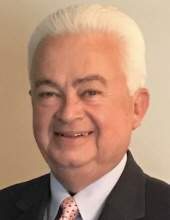 Rev. F. Wayne Carter, 63, of Paducah passed away at 12:41 a.m. Wednesday, September 19, 2018 at Mercy Health Lourdes. He was a native of Paducah. Wayne was a graduate of Mid-Continent University, Union University in Jackson, Tennessee and received his Master’s of Theology Degree from Southern Baptist Theological Seminary in Louisville, KY. He began pastoring at the age of 17 and pastored Southern Baptist Churches and Baptist Churches in Western Kentucky and Southern Illinois for 46 years. Wayne was the Senior Ministries Pastor and member of Southland Baptist Temple. Among some of the churches Wayne pastored was, West Fork Baptist Church in Murray, First Baptist Church in Smithland, West End Baptist in Paducah, Ohio Valley Baptist Church in Ledbetter and Hazel Baptist Church in Hazel. Wayne was a Kentucky Licensed Funeral Director and served as Chaplain for the McCracken County Sheriffs Department. He enjoyed fishing, hunting and spending time outdoors. Wayne was proud of his family and enjoyed being Poppy to his grandchildren.

Wayne was preceded in death by his parents, Floyd Carter and Ruth Byassee Carter.

Milner & Orr Funeral Home of Paducah is in charge of arrangements.

Expressions of sympathy may take the form of contributions to the Gideons Memorial Bible, Gideons International, P.O. Box 10, Kevil, KY 42053.

You may leave a message of sympathy and light a candle at www.milnerandorr.com.