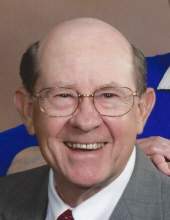 Larry was born in Gates, TN on April 12, 1944 to the late Raymond and Velma Buckner Jackson. He graduated from Halls High School in 1962 before attending seminary at Mid Continent Bible College. For over 30 years he was the owner and operator of Professional Painting Services and was an active pastor for over 40 years.

In the limited time away he had from painting and preaching, he enjoyed squirrel hunting and was a University of Tennessee Volunteers fan. He was a dedicated husband, father and grandfather who left a legacy of hard work and an example of always placing God first.

He will be remembered by those he loved as someone who was very social, loved people and never met a stranger. A man who was an incredible encourager, could control any room he walked into, and was a great example of constantly being a soul winner for Christ.

He was preceded in death by his parents.

You may leave a message for the family or light a candle at milnerandorr.com.