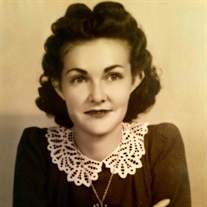 Mrs. Alderdice was born on July 3, 1920 to the late Benjamin Wheeler and Effie Cook Wheeler and was a member of the Lone Oak Church of Christ.

In addition to her parents, she was preceded in death by her husband, James Emmitt Alderdice; a brother, Otis Wheeler and a sister, Estelle Canter.

The funeral service for Mrs. Alderdice is set for 7 PM on Saturday, April 15, 2017 at Imes Funeral Home & Crematory, downtown Murray. A private burial will be held at Woodlawn Memorial Gardens on Sunday, April 16, 2017.